#WIPJoy: What I love about my book-in-progress

Over on my Instagram, I’m participating in the #WIPJoy challenge, hosted by Bethany Jennings and SD Grimm. But I wanted to talk a bit more about today’s prompt, things I love about my work-in-progress, than really works on that platform. I also decided to combine it with tomorrow’s prompt on introducing my MCs. So I decided to write a blog post!

First, some information on my WIP.

Currently, I’m calling it The Prince of Shadow and Ash duology, but I’m debating about calling it The Mercenary and the Mage. I’m not sure about the individual titles. Titles are hard! I have a rough draft of book one, and am getting close to the end of the rough draft of book two. (Although the climax is giving me fits, so this is good timing to talk about what I like about this story.) It’s a romance fantasy with (obviously, since there’s a mage) magic! I’m still fiddling with the blurb/synopsis, but here’s a version for book one:

A former mercenary and the illegitimate son of a lord, Regulus Hargreaves is bound by magic to serve an evil sorcerer until he pays off the debt he owes. The daughter of a Monparthian nobleman and a Khastallander common woman, Adelaide Belanger couldn’t hide her mixed ethnic heritage if she wanted to. But she has a more dangerous secret: she’s a mage, possibly the one only left in Monparth after a mysterious threat killed every mage in the kingdom before she was born. When Adelaide meets Regulus, she is fascinated by this man that her fellow nobles treat with disdain. But loving him would mean trusting him with her secret, a secret her parents insist could get her killed. Regulus can hardly believe that someone like Adelaide could see beyond his scarred face and mercenary past. But would she still love him if she knew the truth? When secrets surface and the sorcerer asks the impossible of Regulus, their choices could affect not only each other, but the future of all of Monparth.

So what do I love about this story?

I’m more of a plotter than a character-driven writer, so I started with a plot. But the characters have become what I love most. (Hence why I decided to lump today’s prompt in with tomorrow’s on main characters!)

The hero Regulus might be my favorite part of this story. He’s tough, strong (physically and emotionally resilient), and incredibly selfless. He would do anything to protect the people he cares about. He had a hard childhood with lots of rejection, so his heart is fairly guarded, but once he’s opened his heart, it’s open.

I also love his best friend, Dresden. He’s a bit cocky, but he’s passionate, loyal, pragmatic, and hates injustice. He always has Regulus’ back, and even though Regulus is his lord, he isn’t afraid to tell Regulus when he’s being an idiot. I particularly love him because he doesn’t turn his back on Regulus when Regulus has given up on himself, and he doesn’t let Regulus wallow in self-pity or think that he doesn’t deserve the best.

I honestly struggle with writing female characters. (I know, I know. I’m female. But, it’s the truth.) But I do love Adelaide. She’s complex and sometimes at odds with herself in a way I totally understand. She loves her family deeply and has a close relationship with her mother. She’s the kind of female I want to read about—strong but still feminine. One of the things I love in this story is that Khastallander women have a heritage of teaching their daughters to use throwing knives and daggers to protect themselves. So Adelaide always has at least one blade hidden on her person, and is often seen playing with a knife or dagger. And if someone were to ask her “how do you know how to do that?!” The answer isn’t “my dad wanted sons” or “I have brothers.” But she also does calligraphy and her favorite hobby is sewing her own dresses—something else she learned from her mother. She’s learning to become her own person, and trying to decide if she’s going to continue keep her magic secret like her parents want, or use her gifts.

On that note, I LOVE ADELAIDE’S PARENTS. They. Are. Adorable. I love a married couple that are still flirtatiously in love. They’re imperfect and both can be stubborn—not to mention overly protective of their youngest, Adelaide.

Nolan. Oh, Nolan. Nolan Carrick started as just a foil for Regulus, but he grew into my favorite antagonist I’ve ever written. He is horrible. I honestly hate him more than the sorcerer (the titular Prince of Shadow and Ash). I hadn’t set out to use Regulus and Nolan to highlight differences in confidence and pride, secure masculinity and toxic masculinity, and love and obsession, but that’s what’s happened and I hope I do it well. While the sorcerer is a big-picture, ambiguous threat, Nolan is the more run-of-the-mill evil. And both the sorcerer and Nolan show how power in the hands of those with selfish ambitions hurts those around them, while Regulus and Adelaide demonstrate how the selfless use of power can be used to help.

Finally, the magic. This is the first book(s) I’ve written with magic in it, and it is a blast. I’m still working on solidifying my magic system and rules, but I didn’t want something too narrow because it loses it’s fun. The magic is very loosely inspired by the aesthetics of the magic in Skyrim. Magic in this WIP is of two basic types: pure magic, which manifests primarily as blue light, and sorcery or corrupted magic which manifests primarily as green light. Mages are closer to paladins, who use their magic primarily to help, heal and defend. Sorcerers aim to acquire as much power as possible through any means necessary and don’t hesitate to use their magic to hurt innocents. Their greed and cruelty twists their magic into something it was never meant to be, giving them more power but at greater cost.

I could say more about what I love about this story—the armor, the dresses, the dragon-slaying, the fairies in book two, the sword fights and magic battles, the way the characters grow. The way they sometimes break my heart. But this post is more than long enough, haha. 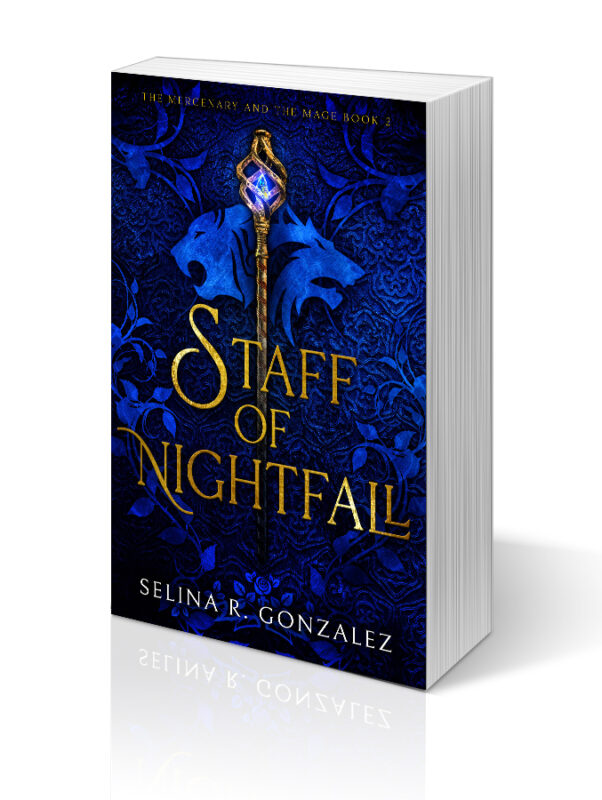